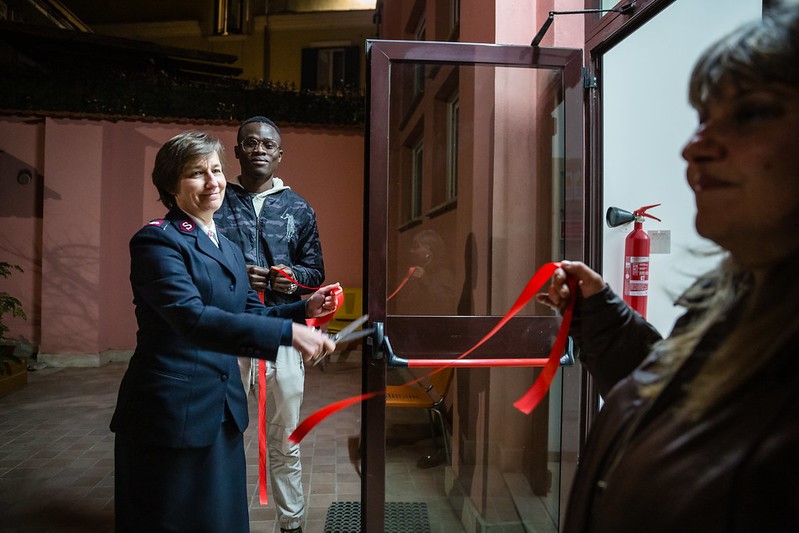 The Salvation Army World Service Office (SAWSO) is ready, willing and able to mobilize around the world, providing technical support and financial assistance to local Salvation Army community centers as they provide for those in need.

SAWSO's sustainable solutions projects -- its newest and fastest-growing focal point -- seeks to take that concept to the next level. Rather than providing funds and expertise to Salvation Army units abroad, SAWSO seeks to help them create their own self-sustaining business models, reducing their need for aid from outside their borders.

This means different things in different places. Sometimes, it might mean establishing a successful thrift store operation -- a tried and true fundraising strategy within the larger Salvation Army organization. Or it may mean a community center building, owned and operated by the local Salvation Army, with meeting rooms, fellowship areas and office space available for a fee to other organizations and the general community.

For decades, The Salvation Army (TSA) commands in developed countries have been blessed to financially support the work of their counterparts in developing nations worldwide, whether in emergency relief, specific community projects, or simply the daily costs of operating in some of the most challenging areas.

But what if we could do more to help each other achieve financial independence, rather than continually provide annual funding? What if TSA commands everywhere were provided with the training and start-up capital they need to pursue sustainable income and support their own ministry programs?

The Capacity-Building Partnership Initiative is a new sector within SAWSO that empowers TSA territories worldwide to develop financial independence and sustainably operate their ministries and programs. They work together to create comprehensive strategies for income generation and provide capital to test a variety of local fundraising and social enterprise ideas, all while developing the capacity to iteratively innovate.

Although there is great potential for fundraising in Rome, The Salvation Army Italy headquarters lacked the necessary start-up capital to establish a successful program. In their own words, “In past years the command had made only sporadic attempts to pursue such initiatives. When results were positive, there was insufficient funding to continue and consolidate, when results were negative, a fear of losing further funds froze any desire to go on.”

But through a partnership and $136,000 grant from SAWSO and the Netherlands Territory, they were able to hire a professional fundraiser and provide a three-year operational budget for basic equipment, travel expenses, and marketing campaigns. The goal was for the position to become self-sustaining once it had time to establish relationships and a first round of donations.

The return was clearly worth the investment. The new office generated more than $5 million for other TSA programs to care for the community’s most vulnerable populations. Shelters and meals for those in extreme poverty, aid for large homeless populations, and support for refugee families were all funded through multiple sources including municipalities, regional NGO partnerships, and even European Union grants. Even more, this strategic investment has given TSA ITY access to a new spectrum of impact and a realm of sustainable resources.

Near the center of Rome, a Salvation Army complex houses TSA ITY’s Command HQ and many of its social programs. One building stood vacant without a specific purpose or funding to renovate it. But when another local faith-based organization started asking if anyone knew of affordable spaces for short-term housing, an unused asset turned into an opportunity.

The Federation of Evangelical Churches in Italy (FCEI) provides critical services to newly-arrived refugee families, but was struggling to find enough temporary space for them to live while their paperwork was processed. The FCEI had steady funding to rent rooms, but couldn’t find anything both affordable and safe. Most importantly, because many refugees fled violent areas, the whole building had to be handicap accessible.

Working with the CBPI to analyze the opportunity, TSA ITY designed an operating budget and remodeling plan that would provide private bedrooms for families, a common meeting space, and a new heating system. They also planned to install solar panels across the entire roof and generate electricity to not just power the building itself, but other parts of the complex as well.

If they could find the amount needed for start-up costs, the ongoing rent paid by FCEI would recover the investment in just 18 months. In addition to providing housing for vulnerable populations, the partnership would provide a steady income for TSA ITY’s other operations and help advance them further towards financial independence and sustainability.

Thankfully, the US Southern Territory generously agreed to fund the project, and on Jan. 23, the new building opened and was filled with grateful families. It will continue to operate as a social enterprise for TSA ITY with the “double bottom line” of missional impact as the top priority, and financial return as a close second.

We will continue to search worldwide for more opportunities to advance the mission of TSA while simultaneously generating income to support the work of local commands. The CBPI will make available its methodologies and resources, and search for more partners like the USS Territory who want to empower the future stability of other territories. And TSA ITY will surely continue to innovate and thrive as they accomplish the work of the kingdom.